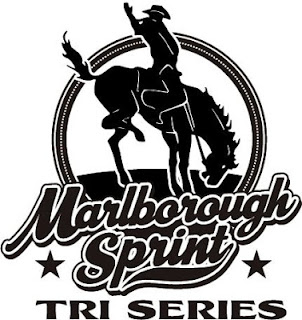 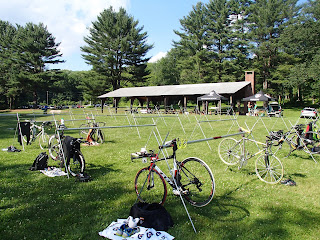 This week I wasn't the first bike in Transition.  I was the second.  The darn person one rack up from me beat me to it!!

After some debate with having the Lake Placid Training Camp two days after this race, I decided it couldn't hurt to head to the race, warm up, and see how I felt.  If I felt good, I'll do it.

I had planned to do about 15 miles riding and 3.1 miles running.  I headed out on my bike and did one loop.  I felt great, so I picked it up just slightly.  Second loop felt great, but I pulled it back a bit; no use in wasting energy.  Third loop felt good, but I was taking longer than expected and if I wanted to get in a run before signing up for the race, I'd have to haul ass.  I opted instead for a fourth loop of the bike course.  I figured I could do an extra run after the race if I really wanted. 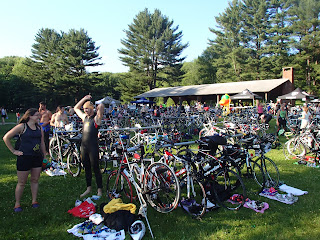 I made it back into transition and had this uneasy feeling that we had already hit our 200 athlete max.  Uh-oh!!

I quickly set up my transition area, ran to my car to get my wetsuit, set all of that up, and prepped for the race.

The women and relays went off at 6:20pm and I never found out who it was, but someone was WAAAAAAAY out in front.  And I don't mean by a few body lengths.  This is a sprint series and the lead swimmer was easily 30-50 meters ahead by the half way buoy.  Crazy!!

Six minutes later, the men were off.

I did my best to stick to my game plan; stay in the lead pack and make use of the draft.  For the first 50-100 meters, I was in between two packs at the lead.  There was a group of 3-4 guys to my left I was keeping pace with and a bigger group to my right that was inching ahead.  Around the second buoy, the groups mixed.  Unfortunately, just after that buoy, I started thinking about the rest of the race and started drifting to the left and lost the draft.  I pulled back to the right and tried to grab onto the lead pack again, but once we hit the turn buoy, they were too far ahead and I never caught back up.  Lesson learned!!

The back half of the swim was me trying not to over-exert myself.  I wanted to push and catch up, but I knew I wasn't going to be able to do it and not waste a lot of energy.

As I came to shore, I figured there were 6-7 guys ahead of me; I guessed based on the size of the lead pack and the few people I did see still running into transition when I got to shore.  I popped up, undid the wetsuit and ran to T1.  As usual, I had a great spot, so I sat right down, slipped the wetsuit off, put on my sunglasses and helmet, and was off with the bike.  I knew I had passed at least a few guys.

In hindsight, I figure I either over estimated the size of the lead pack or really crushed transition!

I ran the bike from the mats over to the mount line, made it up the hill, strapped in my shoes, and then Bill, the race director, yelled "Forty second back" at me.  Cool.  I was only 40 seconds down from the leader, but who knows who that is; I figured I'd I'll be lucky to remain 40 seconds back from them.

Three quarters of the way through the first loop, after being caught by two fast bikers, I passed Ken - yes, my friend the genius - and he waved four fingers at me.  I was in fourth place and the guy ahead of me wasn't pulling away.  I might be able to hang onto this!  I passed him on downhills and straight aways, but he had me on the hills.  He eventually did pull away maybe a half mile, but I opted not to attempt to follow in order to save my legs for the run.  I obviously wasn't going to catch him on the bike, so my best chance was the run.

I am obviously not a strong biker!  But I had held back a bit and was only 1 second away from matching my best Lake T bike time.  Success!!

Running into transition, I see the guy I had been trying to hold onto standing next to his bike.  I knew I was pretty good at transitions and went straight to work.  Bike down, sit down, helmet and glasses off, shoes on (no socks), and I grabbed my hat on the way up and away.  The UConn guy I was trying to catch had gone from my guesstimate of half a mile ahead on the bike to 10 yards ahead out of T2!!  Score!


He would later come up to me after the finish
and tell me how crazy fast I was at transition!
=D

Right out of transition, we head through a little wooded area, around a playground and tennis courts, and make our way onto the road 0.2 miles later.  I was closing the gap and then the first hill came; reserve your energy Kurt!  Let him burn up the hill.  Unfortunately, he slowed down too, but we kept our place up the hill and then on the straight away I pulled ahead.  We took a quick right and went down hill where he opened his stride right up and zoomed back up, but it's a very short down hill and I took him back on the following slow incline.  He never caught back up.

That was all done around half a mile into the run.  I held that pace through the 2.0 mile point attempting to make sure he didn't feel he could repass.  I hadn't seen anyone else coming up, my quads were feeling the burn, and my lungs where working over time.  Since I had the IMLP camp in two days, I opted to slow down a bit and reserve my energy.  Bad idea!

It worked out well for my energy, but with half a mile to go, Chris, a guy who was 71st out of the water, blows past me at a pace I could only hope to keep up in my dreams.  I hadn't heard him come up, so I turned around to see who else might be coming.  All I saw was orange and knew right away it was Scott, a local super ultrarunner.  I immediately picked up my pace.  I was in no shape to catch Chris, but maybe I could shake Scott's mental game enough to make him give up the chase.

We make the final turn back to the finish, I pass the race director again and this time he says...

Haha.  Thanks!!  I crest the last little hill and give it everything I've got.  We're racing to the finish line, I don't dare look back, everyone is cheering, and just before I cross the timing mat, I see Scott's orange jersey out of the corner of my eye.  He beat me by getting his left foot across the mat as my right foot came across.  The timing chip goes on the left.  Darn!!  We ended up with the same time, but his name officially comes first.  Lesson learned.

I couldn't maintain my 4th place finish from the this year's first Lake T, but I might have been able to if I hadn't given up towards the end.  Oh-well.  Live and learn.

After a dip in the water for a natural "ice" bath, I spent some time admiring the sponsorship that the Lake T series has built up. It's quite impressive.

Questions
1.  What lessons have you learned recently during races and/or training?

2.  Do you have people at your local races that you know well enough that you have racing strategies in mind for what needs to happen for you to beat them?
At anything with distance, Scott has multiple upper hands!  I was running for sheer hope at that point.

3.  Do you have sponsors at your local races?

Kurt, great story. This is Jen at Thorlo, and I just wanted to say keep going on your quest - you're doing great. Email me jgrant@thorlo.com sometime if I can help you in any way. Thanks!