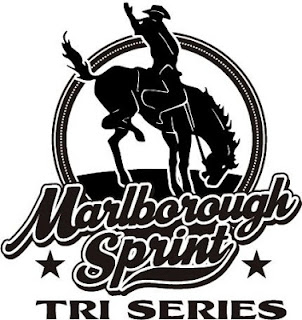 I raced a Half Ironman four days before Lake T.  That about sums it up.

Even before Quassy, I was unsure if I was going to do this first Lake T race of the year.  In the days between the two, I had a headache for two days and felt pretty sore in my hamstrings & left calf.  At first, I figured I would do my own brick and go to a local track practice; I didn't want to hurt myself.  However, deep down I really wanted to race.  The day before the race, I did a lot of stretching and dynamic movement exercises and it helped to alleviate what I felt in my muscles.

On race day, I decided to head to the race site early and do the bike and run easy.  If I had any issues, I'd call it a day and just volunteer.  If I felt I could handle the race, I'd sign up and let my body dictate the race speed. 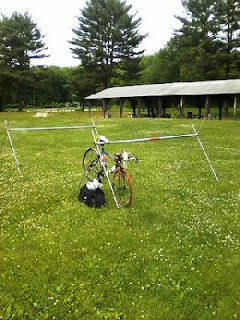 I signed up, stretched, had a Picky Bar & Clif gel, and awaited the start.  We all hoped the incoming storm would hold off.

Based on muscle soreness, the swim was going to be my best leg.  There were a few VERY good swimmers at the front of the pack and I lined up next to Ken, a friend I had been used to swimming with hoping to stick to his feet as long as possible.

At 6:25pm, we were off!  I held pace for the first 50 yards or so and then felt my energy begin to drain.  Darn!!  My energy hadn't been replaced, so I pulled back and did my best to draft the rest of the swim.  I felt much more of an effort than Quassy, but still popped up from the water running to the bike.

Having been the first athlete to the race, I was on the closest rack.  I got my wetsuit top down before I slid to my transition area and ripped the bottom off.  At that point, I realized that Ken, my kick ass swimmer friend was still grabbing his bike three positions down from me.  Woohoo!!  I put on my glasses, strapped on the helmet, and  ran off to the mount line.

In my warm up, my legs still felt tightness in my quads.  Oddly, during the race, my quads felt fine.  On the first loop, it was pretty lonely.  Only one guy passed me and there weren't many people out there to pass.  On the second loop, there was a group of four guys or so that passed me.  It felt oddly symbolic as they passed me in the last half a lap while I started to feel low on energy.

As I finished the second loop, I unstrapped my shoes and dismounted, running the bike into transition feeling oddly good on my running legs.  No complaints!!

Right off the bike, I had a relay runner on my tail.  I was determined not to let him pass me that early, so I took off.  About 0.1 mile down the road, I passed the first place female and spotted the first guy ahead of me.  With the first hill coming up, I slowed my pace and attached a string to the guy's back.  I passed him on the downhill and was quite alone for the next 1.5 miles.  When I spotted another runner ahead, I was relieved.  I figured I was somewhere between 5th and 7th and I had hoped that they weren't THAT far ahead of me.  Over the next half a mile, I made up about 15 second on him.  Then on the final 0.5 mile flat road, I caught up to and passed Chris, a HEAT friend.  No wonder I could see the runner so far ahead, Chris is pretty tall.  I remember thinking "Why do I feel so good right now?"  I was certainly not at my typical pace, but I wasn't fighting to maintain my pace either.  Again, no complaints.

I made the last turn, looked back to see if Chris was going to have a kick, and he didn't, so I kept my pace.

Since it had been raining since mid-way through the bike, I quickly grabbed my gear and packed up the car.  I switched to regular clothes and headed back to transition to cheer on the remaining racers.  Then while I waited for the awards, I made use of a new feature of this race, the Fleet Feet Recovery Tent.  Caitlin from Fleet Feet had foam rollers, pro stretches, balls, bands, and lots of torturous items; very much appreciated!!

Once everyone was packed up, I headed home.  This has become a VERY good local race.  We used to be happy with maybe 60 people in the first race of the year.  We had 173 this past week.  Awesome!!  Can't wait for some great competition.

Questions
1.  How soon after an A-priority race have you raced again?

2.  What's your favorite local race?
The Lake T sprint series is my down right favorite.

3.  Do you do races of all lengths, or do you stick to short/long distance?
I like to mix it up.  While I'd like to focus on the 70.3/140.6 distance, sprints and olympics help keep my speed up, hone sport specific skills without the increased recovery time, and are just plain fun!