This was by far one of the more uplifting races I've competed in to date.

As we all know, Sandy Hook Elementary School suffered a great loss this past December.  With all the hope of those involved and touched, a countless number of programs, funds, scholarships, and events were put into place to help support the school, kids, teachers, first responders, and the residents of Newtown, CT.  One of the events that was suggested was a run.  The Hartford Marathon Foundation jumped on board and offered their services for organizing the event.

The run was originally slated to be in Newtown, CT, but after quickly hitting the 3,000 runner limit, they had to move the event to another locale in Danbury, CT with a new 5,000 runner limit.  Once that was hit, they moved the event to Hartford, CT.  And wouldn't you know, the run still hit capacity with 15,000 runners.  They announced at the opening ceremony that this was the largest inaugural run in CT ever.

They offered a kids 1/2 mile and mile race and the 5k. The 5k didn't start until 10:30am, but given the amount of people they expected to be in Hartford, they suggested being at the race no later than 8:30am.  I arrived at 7:15am to get my parking spot.  It was PACKED!!

I went to the XL Center to get my t-shirt, and caught up with a few people from the gym that I knew were running.


I checked out the start line and figured out where they wanted the runners to line up based on finishing time. 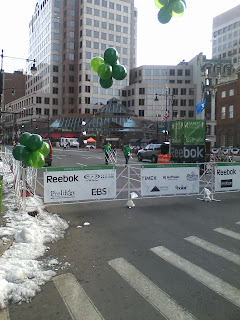 I went back to the car and stayed warm until about 9:30am.  At that point, I made my way over to the start line and quickly realized that I should have stayed in the car.  haha  It was cold!  But I kept running every 10-15 minutes to keep warm and loose - probably ran a good 2-3 miles prior to the race. 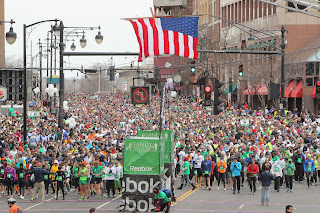 "Runners, take your mark.  Get set.  Go!"  As you can imagine, it was a mad dash to spread out and not trample other people.  I did lock legs with one guy in the first 25 yards, but we quickly spread out and I found myself in 4th.

One guy was hammering it out in front.  Then I heard a couple of guys chatting behind me.  I couldn't believe it.  I assumed we were going sub-6 and they were chatting like it was a Saturday group run.  They passed me and made their way to the front looking quite relaxed.  And of course they were very lightly dressed.  Haha 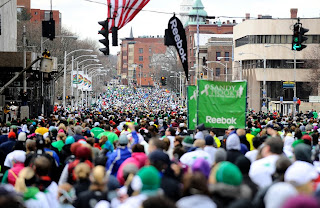 I passed one guy from Colombia, the guy hammering it out at the start fell back, and I was sticking with two guys while we tried to hang onto the third place runner ahead of us.  We made our turn north and hit a small hill where things shifted.  I fell back a bit on the hill as I slowed to not dig too deep and then easily passed one guy into fifth on the slight downhill.  The following straight away allowed me to put some distance between us and the other guy I had been with caught up to and was battling for third.  Mile 2 went by in 6:06.

I knew we had one more incline before the big downhill to the finish.  Sixth place was hanging on as I started to pick it up.  On the uphill I cut the gap by one-third but I was never able to catch 3rd place.  They're battle kept them out of my reach.  We sped down the hill and were rounding the corner to the finish.  The third place battle turned into an all out sprint ahead of me.  Then I heard footsteps behind me.  The guy I thought I had shaken off came back to out kick me.  I gave him a thumbs up as he went by.  I didn't have it in me to give another kick and I saw I was already well under my goal.  Then two more guys sprinted by just before the finish.

I couldn't be mad at that point.  My goal was an 18:00 5k and I had crushed it.  I also have not run a 5k since 2010, so I obviously don't specify for this distance.  Nor do I train for it.  I was happy to finally have what I consider a respectable PR to compare to my other races.

I was, however, quite out of breath and surprised at already being finished.  Less than 20 minutes and I'm done.  I should be used to this.  My longest event in high school was 6 minutes.  But now my shortest event is an hour, so 20 minutes seems like a blink of an eye, or a warmup.

Post-race, I was only able to catch up with three of the people I knew that had run the race, but the rest texted me and they were all happy with their race.  It was a great cause and even with a slower time, we were all happy to have supported it by doing what we love, RUNNING!!!!

Once I got home, I got some food and took a nap.  I was surprised to find that I was d-e-a-d tired!  I slept, got up to munch, laid back down, and was all together lazy for the next 4-5 hours.  I finally peeled myself off my bed to get some miles in on the trainer.  And wouldn't you know, 30 miles on the trainer woke me right up!  You can tell I'm not built for speed by that fact!!  haha

2.  Do you have PRs that really don't match your other race PRs?
I've focused so much on longer distances that I've never gone back 'till now to reset this PR.  Plus, the registration fee to race distance ratio always seems too high with the shorter distances.  I like to get my money's worth!!

3.  What distance race makes you the most tired?

Congrats you speed demon! 8th place overall! I'd slap that on a shirt!