As I've said before, the whole idea of doing the New England Relay (NERelay or NER), was hatched by two of my teammates early this year.  I doubt they even thought they'd find enough crazy people to do it, let alone thought it was sane enough to do themselves.

After a few questioning emails sent out to a few friends of theirs, several forwardings of that email, and a text in my case, it seemed that they did in fact know enough crazy people to form a 12 person relay.

Finally, after plenty of emails sent around about "what should I bring?," "what is this going to be like?," "how do I train for this?," and "are we really doing this?," the week came where this would actually happen.  It wasn't even real in my own mind at that point.  It was still months of random emails about entry fees, required items, thoughts on food, car arrangements, etc.

The Friday before the race, everyone met in Boston; everyone except me that is.  They met up at one person's apartment, met one another, and went over the items needed for each car, what everyone had, and divied up the items as needed.  A few hours later, everyone split up, went wherever they were crashing, and tried their best to get the last good amount of sleep for the next 48 hours. 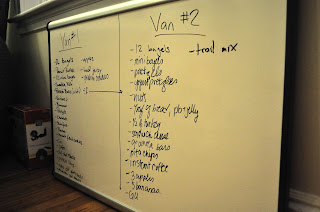 As they were leaving to get sleep, I had just left work in CT.  I got a call from one of my teammates while on the road to Boston letting me know that I could crash on her couch (yay, I didn't have to sleep in the car).  When I arrived around 11:30pm, I officially met the first of eleven teammates (I had only ever met two of these eleven people before), transferred my stuff to the team vehicle, set my watch for three hours, and crashed around midnight.  As I laid there, I kept thinking "This is actually happening.  When I wake up in three hours, I will be heading to Rhode Island to run 223.5 miles with nearly complete strangers.  This isn't just an idea anymore."  I got at least a good 2.5 hours of sleep and I was quite thankful for every second.

Around 3:45AM, we headed over to another teammate's apartment, picked up 4 or 5 of our teammates, and cruised over to Whole Foods to meet the other vehicle (PS, Whole Foods is DEAD at 4AM).  Finally!!  All twelve crazy ass runners connected only be previous associations and email were in one single location about to realize that they had signed up for a lot more than they realized.  haha!! We did a bit of transferring and were off at 4:15AM. 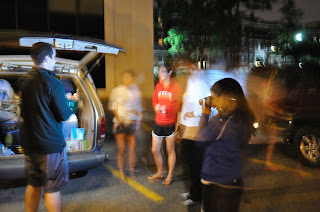 I fell asleep in the car on the way up and hadn't actually caught everyone's name yet.  I figured "Eh, I'll figure it out soon enough."  We chatted a little, more about what everyone did for school/work, where you're from, who you knew in the group, etc. as we drove.  Eventually, we pulled up to the state park we were to start the whole shindig at.  Wouldn't you know it, there are no signs!  Where are we supposed to go?  You would have thought they'd have a sign - "Crazy people enter here" - or something.  Apparently they attempted the "secret club" feel for the inaugural race.  We drove through and found a couple pop up tent covers.  Hmmm... those must be it.  Our team captain jumped out and verified that we had actually found the right spot.  We got our tech tees, hit up one of the last actual bathrooms we'd see for the next 33 hours, took a team photo, and Runner #1 lined up for the start.

They only had four teams starting at 7AM, so it wasn't crowded at all, but we were in the very first group, so for at least the first few legs, we would be the race course virgins!  The first leg ran for a little less than a mile through the woods and then popped out on the road which is where 90% of the race was held.

Our first runner lined up at 7:00AM and we were off!

Our car, Van #1 thought it was technically an SUV, followed Runner #1 as the other vehicle, Van #2 (actually a van) drove ahead to meet us at the Leg #6 transition.  As per every following leg, we stopped along the route to cheer our runner on as well as anyone else who happened to come by (even non relay runners who just happened to be out at the same time).

We got to our first transition and I suited up!  I had 8.5 miles and I felt ready.  After weeks of runner's knee, and tension in my foot, I was pumped to feel ready to run; it's a feeling I never thought I'd have but I live for it now.  Despite having not really trained for the upcoming distance, I was ready to throw caution to the wind and see what happened.

Runner #1 came up over the crest of the hill and I got in place.  She had held first place until they hit the hills and was in 2nd place by about 50 yards, which signaled to me that I need to make up ground.  If only I had thought about that for a second (what's 50 yards over a 223.5 mile race?!).  She came in, passed off the "baton" (a red rubber "New England Relay" bracelet), and I was off.  We had a slight incline at the beginning of the leg and I had overtaken the leaders before I made it half way up; man, I felt good!! 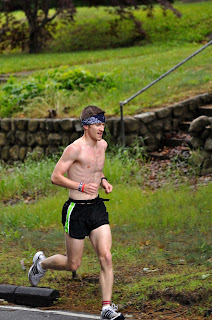 RAIN!!!
Mother nature's way of telling me to slow down?  Maybe.
If you don't live in the Northeast, you should know that after a full week of a scorcher, the entire weekend was on and off rain.  Great racing weather!!
I knew that the first of my three legs was going to be the hilliest, so I figured I'd push myself a little more.  I eased up on the inclines, but not as much as normal.  Every time I crested a hill, I pushed the pace to make sure I wasn't slacking in order to rest; I know my body can rest on the run.

Before I knew it, I turned around and there was no one in sight.  Had I gone out too fast?  Were the other runners just the slower teammates of the other teams?  Who knows, but I wasn't going to slow down and waste precious time while I felt good.

As Runner #2, I got the privelege of running over two of the five state borders and I wasn't going to go home without pictures of it!! 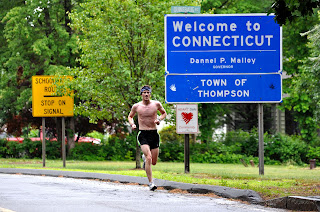 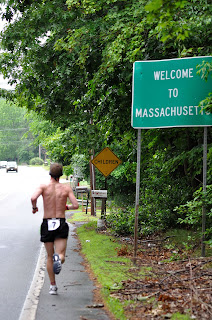 About fifteen minutes in, my teammates drove past cheering and then stopped about 0.5 miles up the road.  I ran past and just from their expressions I knew I was holding a quick pace.  The next time I ran past them they asked "Do you know what pace you're at?"  I yelled out "Not sure.  Something under seven?"  "Yeah!!"  I guess I went out a bit faster than I had planned.  Eh, who needs race day plans anyways?!

This is where I started feeling bad for another teammate.  The NERelay had to reroute some of the legs the week prior to the race because of tornado damage.  This meant that two runners would run this one leg of the relay and a later leg would be skipped.  After running past my teammates a couple of times, they didn't seem to be sticking around to wait for the other runner.  I really hoped that he was doing ok.

I came within sight of the next transition and glanced at my watch; 59:45.  I broke out in what I had left of a sprint.  I crossed the transition cone and hit my watch; 1:00:03.  Darn!!  But still a respectable time!

Once I caught my breath, I learned that my team had given our other runner his water bottle to hang onto, which worked out well for him.  Thankfully he didn't seem to require the additional cheering stops though I still feel bad he had to run without them; they're a big boost!

The remainder of the first set of legs were a mix of a taste of what the NERelay was going to be and an introduction to everyone's personal running style.  Our third runner spent fifteen minutes figuring out which way to go at a crossroads because there was no sign.  Another runner started bleeding and later discovered the incredible benefits of bodyglide.  Another runner fell in a ditch and then got lost on a section of trail due to another confusing set of directions while the rest of us in the car got nearly accused of trespassing on a used car parts lot in the middle of the woods.  This was going to be a crazy day!

It was an eventful Round #1 of the NERelay.  And it had only JUST begun!!

Sounds like quite an adventure! Nice speedy 8.5 mile leg you did. Good job!

This is an incredible story. I can't wait for the next part...

Wow this does sound pretty crazy. I can't imagine doing this with a bunch of strangers....can't wait to hear the rest.

I'm really enjoying this first part of your relay adventure. Looking forward to the rest! Nice work on your first leg of the race!

Oh, and I really like the photos, too. You look strong and fast! Plus, it's really cool that you crossed two state lines!

Cant wait to read the rest

Love the welcome to the state photos.

Aside from a few snags it sounds like an awesome race so far!