Once we got there, I got out and walked around for a good 20-30 minutes trying to keep my legs as loose as possible.  There were a lot of vans at this transition - all the other teams just waiting for their runner to come in.  It was pitch black out except for the occasional street lamp every 100 yards or so.  I walked around while a few of our runners nodded off again.  I chatted with the transition official who told me that the runners had been a lot more spaced out than he expected at this point in the race (transition 24 of 36).  There was a bend in the road just before the transition, so we couldn't see a runner coming until they were about 200 yards away.  As it got closer and closer to the cut off time, more and more people gathered at the road awaiting their runner.  After a few minutes, our other vehicle came up and said our runner would be here in about 5 minutes; time to get ready!

Just before 4AM, our runner came in, handed off the "baton" and Van #1 was on it's way to finishing its last leg!!

I will admit that I don't recall a lot about the first of our legs.  I was again nodding off in between cheering sessions.  Like I said, SLEEPY!!  I do recall that our first runner had to run through a bit of trails to make it to the transition area while we drove around.

Once at transition, I hopped in a port-a-potty (which by this point had taken on the expected odor) and changed into my running shorts.  I also had a "meeting" with my teammates.  I told them that whenever I run past them, I am required to drink water.  I had gotten dehydrated in the last leg and I didn't want to let it happen again.  Then, since it was early morning and I was extremely tired, I figured I'd wear a shirt.  The reaction from my team was "I don't recognize you with a shirt on."  I guess I'm the topless runner!  I tossed on my long-sleeve tech and then spent 10 minutes searching for my racing belt.  Just as I found it, I hear...


"Kuuuuuurrrt!!!  Kuuuuurrrtt!!"
I guess our runner had made it into transition.  I close the door to the car, jog my way up to the road yelling "Our time in transition doesn't count against us, so hold your horses!!"  One guy from another team had a good laugh at that.  haha

I get up to the road, grab the baton and lights/vest from our runner and then look at the road.  I look towards the cop standing in the road and ask "Ok, which way do I go?"  He points down to the right and says "Follow the yellow signs."  I laughed and headed off at what felt like a very slow pace.

Two minutes later, I get a little surprise.  Rain!!

Again, I laugh, throw my hands and head up like the escape in Shawshank Redemption and just keep trudging on.

There's a runner a ways up ahead of me and I decided I wanted to keep him (or her) in my sights.  That lasted an entire two minutes until I rounded a bend and "Hey, where'd he go?!"  Oh-well.  Then there was a runner that came up behind me; I could hear her footsteps.  I figured that'd be just as good a push, so why not try to keep her behind me.  I gauged how far back she was and pushed on.

About two miles in I see a blinking red light and figure maybe I had caught back up to this guy in front of me.  A minute later I find out it's just a light that got dropped.  I run up to it and pick it up.  I handed it off to my teammates and told them to drive ahead and give it back to the guy in front of me.  Turns out it wasn't his, so we hung onto it.  Whomever it belonged to, Thank you for the light that will now be used for my night riding!

When my teammates did come by, they handed my water bottle out of the window.  I stopped, grabbed it, took a swig, handed it back, and ran on.  I asked for a Shot Blok next time around and they drove off.  While I had stopped to drink, the girl behind me passed.  I wasn't upset about it - I needed the water for sure - but it turned out that trying to stay ahead of someone was easier than trying to stick with them.  In time she pulled out ahead and lost sight of me by the end of the leg.

Before that thought, I ended up being passed by another girl who not only passed me, but did so at quite the click.  She passed, said "Awesome job," and I couldn't even utter a response.  I came to a conclusion during this run that I have never used my arms so much during a run than I did during those 7.5 miles.  At times I felt like walking would have been quicker, but I kept trudging on.

About a mile down the road after the second girl passed me, I hit a roundabout which I knew was only 0.2 miles from the finish.  I had never been so happy to know I was almost done!

I pulled into transition, dripping wet and ready to fall asleep on my feet in yet another ONE HOUR FLAT.  I passed off the baton, kept the night gear (because it was just after 6AM and we no longer were required to wear it), and just laughed.  "This really was a crazy idea; thinking we could run this."

A guy from another team handed me a water (thank you dude!!) and we were off.  I felt so much better at the end of this leg and I think my pace was the reason why.  I finished in 8:06 pace.

From here, we followed our next runner through a small little down in NH.  At one point we stopped along the road to wait for her and she surprised us by running by on the right side of the road!  In our surprise, we turned the key for the car and... *click*click*click*     *click*click*click*   SHIT!!  Our battery was dead.

We tore everything out of the back trying to find jumper cables while one of my teammates ran around to all of the cars parked around us.  No luck.  We made a call to our other vehicle - if we couldn't make it to transition, maybe they could.  But in the middle of that call, we tried the car again and it started!  PHEW!  We sped off and made it to transition before our runner did.

The voicemail we left for the other team went something like this - "Hey.  We nearly had an emergency.  Just letting you know.  Bye."  I bet that raised some eyebrows!

As one of my teammates said, "I don't need an energy drink, just a scare to wake me up!"  haha

After that, it was rather smooth sailing.  We also came to realize what truly made our team; a cowbell. 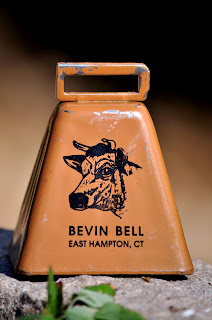 Throughout the race, we had used the cowbell for cheering our teammates and anyone else on.  But it wasn't until the final set of legs that we started arriving at the transition areas and ringing it non-stop once a runner was in sight.  Even the other teams began making comments about the cowbell.  Some runners were thankful for it.  Others (You know who you are... Red Beard) made fun of it.  We figured it was the final beacon telling them that they were almost home.

For Red Beard, however, it was a taunt.  In one transition, he kept trying to determine whether the cowbell was actually making people faster or not.  He concluded "no."  So when we passed him on the road during his leg of the race, we slowed right down and rang it for a minute straight.  His response...  "Oh come on.  I have eleven miles.  You're not going to ring that thing the entire time are you?"  Unfortunately, a car came up behind us, so we couldn't.  However, when he finished that leg, his teammates specifically requested that we ring it just for him.

Another guy who saw us at one point without the cowbell surprised us with "Woah!  I didn't even recognize you without the constant ringing of that bell!"  We were happy that it had made an impression.

Our team name next year might have to be COWBELL.

The last leg for every runner in our vehicle was sweet!  It was a little celebration as you ran into transition knowing that you no longer had to worry about another run in 4-5 hours.  After our final runner pulled in, we cheered on our other vehicle for a bit and then decided to grab brunch!  My teammates all pulled out their fancy touch-screen, interent-access phones and began debating over where to go.  All I remember is pulling onto 101 East and then we parked.  I woke up and saw we decided on the Sunrise Grill.  The waitress was one of only a select group that knew what the New England Relay was.  She also was not surprised when we ordered an incredible amount of food. 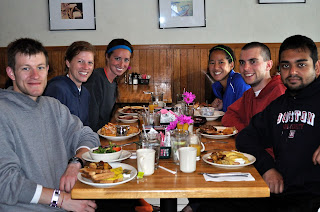 After eating, we headed off to do just that, eat AGAIN.  We made our way to the NER Finish Line where they were serving Lobster Rolls!!! 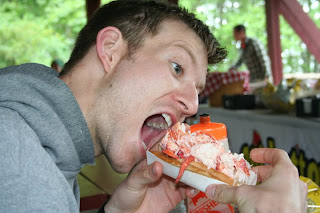 Let me just say that they were delicious!  We unfortunately couldn't wait around for our second vehicle to finish because one of our teammates had to catch a plane home, but we did get a final Vehicle #1 team photo. 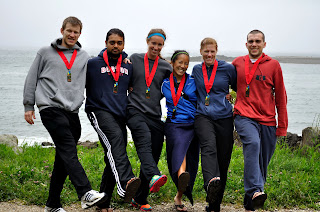 And there was a little bit of playful team rivalry. 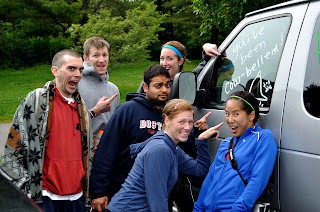 That's Red Beard's team van, FYI.  ...Which now says "You've been cow-belled."  They were a great group of runners among many many other awesome teams!

This concludes the Inaugural New England Relay Race Report.  But don't worry, more will be coming soon.  If I have my way, I'll be doing 1 or 2 more by the end of this year!

What an epic race! Thanks for taking us along. I dont' know how you did it, and so quickly too! Nice work!

great race and awesome RR! (sans blogger pic support). Blogger sure has had a lot of issues in the last couple months. Maybe the hackers are smarter than the Google folks. Seems like Google should buy off the top hackers.

I liked your report, sounds like fun (if I was more of a runner). My favorite part was when you ran up to someone's red flashing light. I'm sure you are right in that someone simply dropped it. But did you consider the other possibilities? Maybe they were kidnapped by aliens. Or maybe the Rapture occurred and they went up to Heaven! Or maybe they ran off the road by accident and needed your help. Just kidding with all this...

Congrats to you and your team! So glad that your van eventually started, saving you from a major emergency. I also like the Shawshank reference... best movie ever!

Awesome Race... Cowbell is classic. Reminds me of SNL.

Awesome recap!! Your team name could be "Gotta Have More Cowbell!"
Sounds like you had an amazing team!