No New Running Shoes until Feb 2014

For 2013, I am currently averaging 28 miles of running per week.  The last two pairs of my beloved Pearl Izumi Streak IIs began needing replacements around the 700 mile mark.

Therefore, with the two new pairs I just bought, I should be all set on running shoes until Feb. 2014. 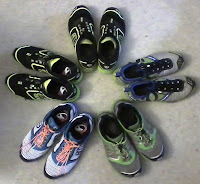 I have until Feb. 2014 to find a shoe model to replace the Streak II.  Time to keep my eyes open!

Questions
1.  How many pairs of running shoes do you currently cycle through or at least have on reserve for rainy days?
The ISO Transitions only get used sparingly.  I've been using two pairs of Streak IIs recently, but now have three until I feel the new shoes are broken in enough.

2.  What's the most of the same shoe model you've been through?
The newest pair of Streak IIs puts me at four.

3.  How many shoes do you go through in a given year?  (or how long does a single pair typically last?)
I've been extremely lucky (or biomechanically fortunate as the running store tells me) in that I've gotten over 700 miles out of both pairs of Streak IIs.

I'm in New Balance shoes, minimalist. I love them. I love being able to run with shoes with not a lot of cushion at all. I bought a pair of Brooks Pure Cadence and even though they're great shoes, still too much cushion in the bottom. Good thing about minimalist shoes is that they're cheap so I go through about 2 pairs a year. Maybe 3.