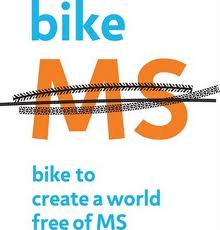 As most of you already know, last weekend's MS Bike Tour got postponed due to mother nature's irritable toddler we know as Irene.  You also know that it was postponed to the weekend I'll be in Vegas for my second Ironman 70.3.  On top of that, you know that I was not all too happy about the hurricane date and have been planning the MS Bike Tour de Kurt.  As of 9:00PM last night, the tour is complete!


"In the end, I was fatigued, hungry, sun burned, and beyond happy with myself.
I had ridden to all six gym locations in one day
and doubled my cycling distance PR."
Let me first say that while I would have loved to have the company of other riders on the road, free massages at the finish, and an open buffet, I think yesterday's ride gave me a set of experiences that the MS Bike Tour would not have provided.  I certainly look forward to riding an MS Bike Tour in the future, but for this year, yesterday's ride more than sufficed in my mind as my own personal culmination of this year's efforts to help those affected by MS.

And despite the fact that this was in no way a race, here's a race report anyways...

I headed out the door at 9:30AM.  I had six gyms to stop at, six managers to take a picture with, and 105 miles to cover (see the original map HERE).  The first stop was in Manchester, only a 14.9 mile trip.

I quickly learned that the joy of telling every employee I met why I was riding around and how far I was planning on going was well worth the ride on it's own.  Arthur was completely pumped by my ride and vows to finish the MS Bike Tour before my manager does.  Hear that Neil?, you've got some competition!

The next leg of my journey was the shortest, only 6 miles.  Prior to heading to each stop, I made it a habit to call my home gym, which would be my last stop of the day.  They took down my estimated arrival time for the next stop and if for any reason I didn't call by then, they knew who to call.  I figured even though I may be crazy, I might as well be a crazy person with a back up plan, right?.  So after 6 miles, I stopped into Vernon to see Emily.


This is where it started getting "FUN."

After Vernon, I headed to Tolland.  It was only 9 miles, but this was where the hills began.  The next twos stops were also areas that had been out of power since Irene came through, so most of the traffic lights were replaced with stop signs making it very 'stop & go.'  But about an hour later, I made it to Tolland where I found Jason and Lara enjoying the sun in the parking lot of their gym.

I took a tour of Jason's gym, jammed out to some Ke$ha, and discussed the potential benefits of a hot dog stand & car wash before I headed out, leaving them to their business.

When I mapped out the course between Tolland and my next stop, Mansfield, for some reason I had it in my head that it was going to be downhill.  It was just as I was leaving that Jason said "Enjoy the hills to Mansfield."  It turns out we were both right.  The first hill came not half a mile from Tolland and there were plenty more along the way.  However, I also hit my max speed of 44.6mph during this leg; THAT was a great downhill!  I even got to ride through the UConn campus.  It was nostalgic to see a campus full of students walking around again.

Thirteen miles later I arrived at my next stop, Mansfield.  Since the mall was out of power, I wasn't able to get a picture at the gym, but I did get one of the mall entrance.  Don't worry, I caught up with Lacey, Mansfield's manager, later on.

At this point, I was getting low on liquids, so I stopped into JCPenney's (apparently they were on a different, unaffected power grid) and asked if I could refill.  Apparently JCP doesn't like cyclists; oh-well.

The next trip was to Wethersfield.  The map said it was 33.6 miles.  It would turn out to be more like 41 miles.  But for that reason alone, I kept my eye open for a place to refill my water bottles and low-and-behold, I ended up riding past this place... 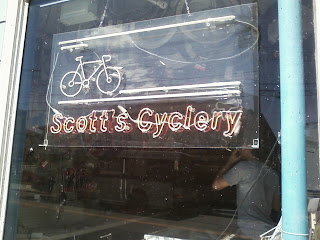 I stopped into Scott's Cyclery, met Scott himself, and he quickly showed me where I could fill up.  We chatted about riding, some riding groups in the area, and my trip before I headed back out.  If you ever get a chance, stop in and say "hi" to Scott.  He is an incredible person and I cannot thank him enough for being my oasis of the day!


Now it's time to get lost!
I ended up getting lost three times between Mansfield and Wethersfield.  The first time was because I wrote down the wrong highway on my directions; I wrote 66W instead of 6W.  So when I found myself on 6W, I turned around and went back.  Then when I couldn't find the road I wanted on 66W, I ended up calling for some help.  After 20 minutes, we figured out where I was and I got directions on how to shortcut my way back on track.  Phew!  The second time I got lost was because the road I was looking for wasn't a road at all.  I was able to stop a landscaping truck and the driver told me that the road I was looking for was actually a dirt path.  He gave me incredibly clear directions and another twenty minutes later, I was back on track!  The third and final time I got lost, I was while attempting to cross the Connecticut River.  For the life of me, I couldn't find the pedestrian bridge until a very polite pedestrian pointed out that I had passed it twice already.  Duh!!  It ended up being a different bridge than my directions, so I had to meander through Hartford until I found my way back on track.  All-in-all, I learned that google maps for a bike isn't the most trustworthy.

I also learned that attempting to stick to non-major roads isn't always the best idea.  There was one spot where I turned off of 6W in order to try and stay safe on the back roads, a road called Shoddy Mill Road.  I regretted that decision immediately.  It should have been called "Shoddy Never-ending-uphill Road."  And thankfully this was the road I got lost on the second time.  So when I rode down the other side of the road and realized I was lost, I had to ride right back up it.

Finally, after 4 hours, I made it to Wethersfield.

Unfortunately (or fortunately depending on how you look at it), the manager at Wethersfield was so busy that I couldn't get a picture with her.  Instead, I got a picture of their sign. 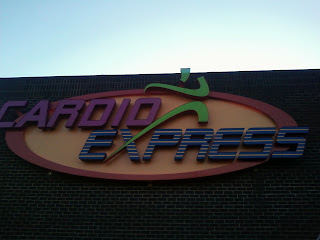 It was pointed out to me at my next stop that
because of this fact, I will have repeat the entire ride.
"Haha.  Funny!"
I may very well do that, but it won't be soon.
The next stop was my home gym.  The trip was 16.9 miles, but only half of it was new to me.  Once I was back in New Britain, I knew all the roads, so I went on auto pilot.  And let me tell you, I have never been more happy to pull up to my gym than I was last night!

As I walked in, I was greeted with many variations of "OMG, you are nuts!" and "Congratulations!"  To put it lightly, they were happy to see that I was still alive, didn't seem visibly hurt, and was talking straight.  I had made it to all six locations!  But I couldn't forget the last two pictures amongst the celebration.

And then you remember how I said I would catch up with Lacey later on?  Well, since she is without a gym, we've been hosting her at our gym.

So now with roughly 100 miles on my legs, I headed home, again on auto pilot. 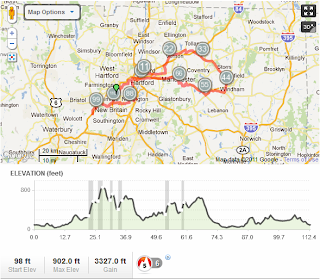 So despite not being able to ride the official MS Bike Tour and take part in such an amazing event with such amazing people working towards a common goal, yesterday I got to participate in my own way and I got to do it even more of my own way.  Why do 25 miles when you can do 50?  Why do 75 when you can do over 100?  And being able to help so many people while having so much fun almost feels like I'm cheating.

Finally, thank you to everyone who has donated/ridden or will donate/ride with the National MS Society.  Thank you for helping me use my own talents to help others.

And remember, it's never to late to donate.
Help create a world FREE of MS.
Just click HERE.

What a great idea! I love the fact that your ride ended up being 112 miles. Ironic, huh?