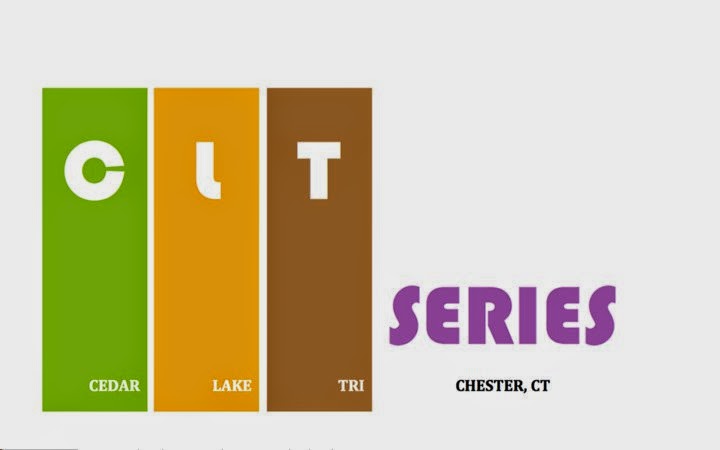 
If you've been with me for awhile, you know that I participate in a CT sprint triathlon series at Lake Terramuggus (often referred to here as "Lake T").  I've done that series for three years now.  Over that time, the Cedar Lake Tr (CLT) series popped up and over the years, I had never made ti down to race it.  This year, the first Lake T race fell AFTER Rev3 Quassy, my first big A race of the year, while the first CLT race fell before.  Easy choice!  I went down to Chester and raced CLT as a way to shake out the rust and hopefully work out any kinks before race day.

The race started at 6pm.  I showed up around 4:45p.  One big benefit of my job is that I get out at 2pm on Thursdays, so I have time to go home, get my stuff, eat, and get to the race without rushing.

The venue is more compact than Lake T, but no less beautiful.  There is a large beach right on Cedar Lake with a covered picnic area used for registration, a grassy area used for transition, and a snack shack used for...  well... snacks!

For a kick off race with a 68 degree water temp, there was a good showing; 79 racers.  From the looks, they might hit capacity at a little over 100.  Of those 79, we had 19 first time triathletes, two ladies that traveled down from Maine for a school project, a few All American triathletes, and even one professional.  It was quite the impressive field on both ends.

At 5:55p, I headed into the water.  My plan was to go hard as long as I felt like it and back off when I needed to, but overall get all the kinks of race day out of my system and have a solid performance going into Quassy.

The swim course is a counter-clockwise triangle of roughly 600 yards.  We started from the beach on the right, swam out to an orange buoy and back to the left side of the beach.  Being a better swimmer, I always try to start at the front.  After this race, I may consider starting wide more often; it was VIOLENT!  Maybe I was just in the middle of a single group, but there seemed to be a good number of faster swimmers; more than I'm used to.  I even got hit in the nose by someone's elbow and spent the last quarter of the swim wondering if my nose was bleeding.  That was the most chaotic swim I've ever had!  As a post-race thought, the 68 degree water temp actually felt pretty good.

I popped up on the beach and took a hard left down the beach, right next to the boardwalk, towards the bike racks.  In that distance, was able to un-velcro my wetsuit and pull the zipper down, but had to take the rest off while at the bike racks.  I grabbed my stuff and was quickly out onto the road.

For safety sake, since we were entering onto what could be a busy road, they had us run our bikes across the street before mounting; easy peasy!  The police were awesome!!  I ran across, jumped onto the bike, and was off.  I gave myself about half a mile before I went to slip my shoes on.  I waited so long because the rubberbands that held them up broke, so I needed a longer stretch to reach down and hold them up while I slipped them on.


Shaking off the Rust Lesson #1
These new shoes require two rubberbands to work on a flying mount.

Because it took so long, I forgot to strap down the front velcro piece, so I just left it open figuring I'd get more ventilation.  That turned into a lot of movement in my shoes.  Bad call.


Shaking off the Rust Lesson #2
Strap down the entire shoe!

The bike course is a single clockwise loop of roughly 10 miles.  The only two lefts that you take on the entire course are when exiting T1 and entering T2; otherwise, it's Rights all day long.  I hammered the first 3 miles or so.  When I looked at my watch to see that I was only 3 miles in though, I laughed and immediately backed off.  There was no way I'd be able to maintain that effort and less of a reason to given that I had Quassy on Sunday.  I kept the pace strong, but a step below red-lining.


Shaking off the Rust Lesson #3
Like my run, I need some distance on the bike before my body falls into a maintainable pace.

Having not known the course, I was impressed with how easy it was to navigate.  There were police at the major intersections and the turns without volunteers had easily visible signs.  There was only one sharp turn that I slowed down to look back at.  For some reason the turn seemed questionable and I was nearly out there by myself, so I made sure the guy behind me turned as well and then went back to it.


Shaking off the Rust Lesson #4
It is helpful to have reviewed if not driven or ridden the course!

Around mile 7, I decided that in prep for Quassy, I should try taking out one of my salt tablets.  Let's just go through the motions and see if it settles in my stomach.  I grabbed the Salt Stick dispenser, twisted, and the whole thing twisted with it, which kept from dispensing the pill.  Oh-Gees!!  I even pulled it off and tried twisting it with both hands.  Nothing!


Shaking off the Rust Lesson #5
The Salt Stick dispenser may give me issues.

Finally, I saw Cedar Lake through the trees and knew that I was nearing T2.  I quickly took my feet out of my shoes, took a photo op, and headed into transition.

Racked my bike; the racks are real close to the dismount so you don't have to go far which is nice.  I sat down, slipped on my shoes and was off.  I did go with the road shoes instead of the slip on tri shoes as a full test for Quassy.  It went pretty smooth.

This has become my bread & butter section.  As long as I don't expend myself on the swim/bike, I've grown to have a lot of control in the run.  And as the photographer (my friend who took all of the photos I'm using in this blog) told me, "You took off like a bat out of hell from T2!"

The run course is a 3.1 mile out and back which was great because you get to see all the other racers out on the course with you.  That helps to pass the time.

I let myself push the pace for the first mile as I normally would.  That first mile went by slowly.  Looking down at my watch for the mile lap, I was going much faster than I expected; the 1st mile was 5:53 while I'm used to hitting 6:10-6:20.  I decided to let my HR stay where it was at (170 bpm) and just enjoy the run.  Again, I had no need to kill myself today.

I was caught by one runner and passed another.  Once we got close to the turn around, the leaders went by and they looked good!  I hit the turn around, sipped a water from the aid station, and then decided that I was going to pass the remaining time by low-fiving all the racers as they went by.  Trust me when I say that my hand hurt, but the distance went by quickly.

And I had another photo op coming up to the finish!

The best part about the local races is being able to hang out with friends afterwards.  And I'm only 30 minutes from home, so you're not restricted by a long drive, a hotel stay, or the need to decide where to eat.  Get to the race, race, hang out, go home.  Easy!

I'm glad I finally got to check out this race.  I had heard a lot of great things from friends and now I can finally add my own two cents; this is a great race.  The venue is quaint and beautiful, the course is great, the people are awesome...  Great race!!

Questions
1.  Do you have a local sprint series that you participate in?

2.  Do you use various distance races throughout the season to change things up or do you stick to one distance and just spectate anything shorter/longer?
I like to use sprints for some fun speed work and a change up to training.  I like to use Olympics for the same thing, but more of a high intensity training day than just going out for fun.  I don't think any of us would look at a 70.3 or 140.6 as a choice training day.

There is a local series here in QLD that I always do. My club encourages attending it due to the lower numbers and counity atmosphere (often lacking from bigger races)

My A race is an Olympic distance each year, and this series offers sprint and a halfway to Olympic option. Works out nicely

I want to do a sprint sometime!