This "un-race" began in 1970 when Bernie Jurale ran up to the radio tower on top of the West Peak in Meriden, CT on his 70th birthday.  He continued the tradition through 1979 having been joined over the years by students of his from the local high school.  Since then, the run has carried on in the spirit of it's name, a tradition.  No matter the weather, runners congregate and make the trek up to the peak.

The run is free.  There's no official timing.  Walkers are suggested to start at 10am and runners at 10:30am, but people can and do start whenever they like.  The course, having been changed since Bernie's first run in 1970, takes you up the back access road to Castle Craig at the East Peak of Hubbard Park.  Unfortunately, misdirected by the name, it is not a castle, but a watchtower.  It offers the best view of the Meriden area around and is the highest point within 25 miles of the coast from Maine all the way to Florida.

This is the third year I've done this race.  Every year I try to psych myself up for it and every year I end up gritting my teeth and struggling just to continue without walking.  Here's why.

Above is the elevation profile for this race.  Mile 1 is okay.  Mile 2 is tough.  Mile 3 is beyond torturous!  According to my Garmin, we climbed 667 ft, 400 of which was in mile 3 alone.  Here is a picture from roughly 0.5 miles in looking up to the finish line at Castle Craig. 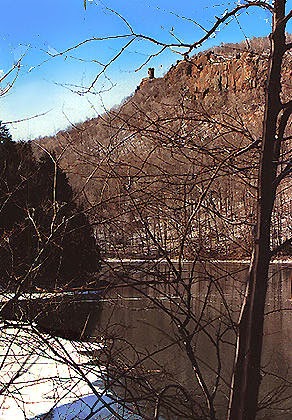 I would suggest not looking in that direction and discouraging yourself at this point in the race.  Keep looking forward.

This is NOT a PR course!!

Let's see how it went.

I got up without my alarm (the best way to wake up) around 7:30am.  I ate breakfast (3 eggs, toast, banana w/ pb).  Then I spent some time catch up on emails and about 30 minutes stretching.  My hamstrings have been really tight lately, so I've been working on making stretching more of a daily habit.

Given the limited parking available, I left at 9am and got there at 9:30am when registration began.  The lots were already about 95% full.  Anyone who showed up later had to park along the park entrance/exit roads.  This party has quite the following!!

I got registered (just a waiver form), hit the bathroom twice, and went back to the car to listen to some music.  Volbeat's A Warrior's Call and Shinedown's Bully all the way!!  With about 20 minutes 'till the start, I switch into my running jacket, took off the sweatpants and headed out to warm up; about 10 minute jog with a few striders thrown in to loosen up and get the HR up.

The weather called for mid to upper 30s with wind chills in the mid twenties.  I ran with my thermal shorts (one of the best running gear purchases I've ever made), calf sleeves, a long sleeve shirt (though I could have gone short sleeve), and my Brooks Utopia mittens.  Because this race always fails to have water at the top (though they advertise they have it), I politely asked the photographer if I could toss my hydration pack in his truck.  That was a huge help!

I lined up at the start line with 2 minutes to go.  Here was my plan - push to get a higher HR average (my current HR PR at the 5k is 180 bpm).  I'd also like to beat my previous course PR of 22:xx, but while I really did want to beat it, it meant less than hitting that HR PR.

There was a scrawny kid (probably looked like me) doing sprints at the start line to stay loose.  I'm going to call him Captain because he had a Captain America shirt and socks on.  He had a track tattoo on his right calf, so I pegged him as the likely winner and decided to let him go on ahead.  This was both a good and bad thing as you'll see.

"Haha.  Funny, funny!" I commented as we started out.  Probably half a dozen runners burst out from the front.  A friend of mine, Adam, came with me for the first 0.05 miles and I secretly hoped he would hang on, but he didn't.  That start always seems to go in slow motion and fast forward all at the same time.  About 0.1-0.2 miles in, it was the Captain out in front, me and at least one person just off of my heels.  I could hear their footsteps.

I quickly found a pace that felt like a push but wasn't overly taxing.  I tried to maintain it while my HR jumped and found a groove to sit in.  The Captain was inching forward but not quickly.  I had already tagged him as running off ahead, so I was content with simply keeping him within reach for awhile.  I focused more on the steps behind me, trying to push a bit on the flats to put some distance between us.

Once I turned my focus behind me, I started gaining on the Captain.  For a split second I thought maybe I should slow down.  'Am I taxing myself too early?'  Immediately, I threw it out and kept with my pace.  If I catch him, then I catch him.  'Stick to YOUR pace Kurt!'  And I did.

Just around mile 1, I caught the Captain, pulled up along side, and must have lit a fire inside of him 'cause he surged forward again.  I let him go, but he didn't go far.  He got ahead on a little hill and then I started catching him again on the down/flat.  We crossed the north end of the pond at around 1.75 miles in, took a photographic moment of us neck-and-neck, and then he backed off and let me lead.

This proved to me that A) I should not have pegged him as the winner at the start line and B) he probably helped pull me along faster in the first 2 miles than I would have gone on my own.  They were certainly faster than my previous 2 runs on this course.

'I am in the lead!  I am actually winning a race and it's not just the first 20 seconds.'  That went through my head as I made a few turns and started up THE HILL.  Nearly 400 feet of constant UP.

Well...  Haha.  It didn't last long.  The Captain kept fading until I couldn't hear him anymore, but about 0.25 mile up the hill I was passed by the eventual winner.  If he was the footsteps behind me at the start, then he was smart.  He probably saved himself for the hill, knowing that we all fade there.  That, or he just runs here all the time and knows better than most how to attack it.  Either way, he breezed past me at a good clip and just kept on chugging.

I spend the entire hill desperate for a reprieve.  I convinced myself that every horizon, every turn was the end of the hill.  My body slowed, my HR stayed up, and my legs went into auto-pilot, refusing to respond to my commands.  After about ten false crests, I finally made it to the top.  There is a short downhill and then an even steeper but short uphill.  Finally, there are a few twists and turns before the finish line.

I put everything I had into it and crossed the line as someone yelled out "21:39."  Or at least I thought it was thirty nine.  My watch read 21:49, so I might have not heard him correctly or my mind wasn't in the best state to remember things at that point.  Either way, 21 minutes anything meant that I had beaten my 2013 PR.  Woohoo!!!  However, my average HR was only 176.  Bummer!

The photographer took my name and city and I went to his truck to grab my bag.  I put on my windbreaker, grabbed a sip of water and put on the hydration pack.  I took a quick picture of Castle Craig before I headed back down. 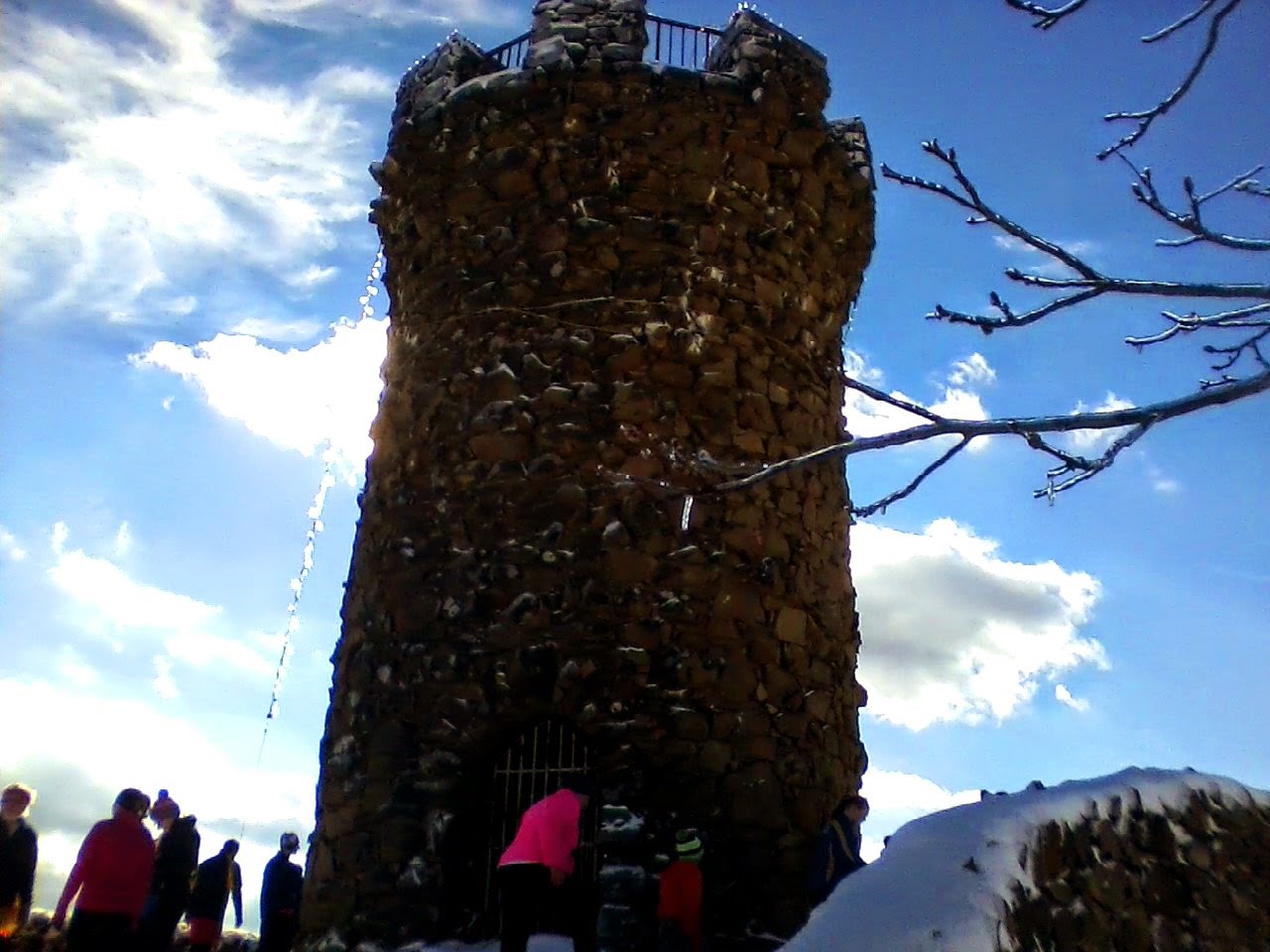 The way back down was MUCH easier, though the course seemed so much longer this way than it was on the way up.  Weird!  I made it down, got my piece of cake (yes, post-race cake for a free race), got a patch/certificate, and headed back home.

Once home, I noticed my left ankle was bothering me.  I didn't remember hitting anything, but... (*looks down at ankle*) WOAH!!  When did I do that?! 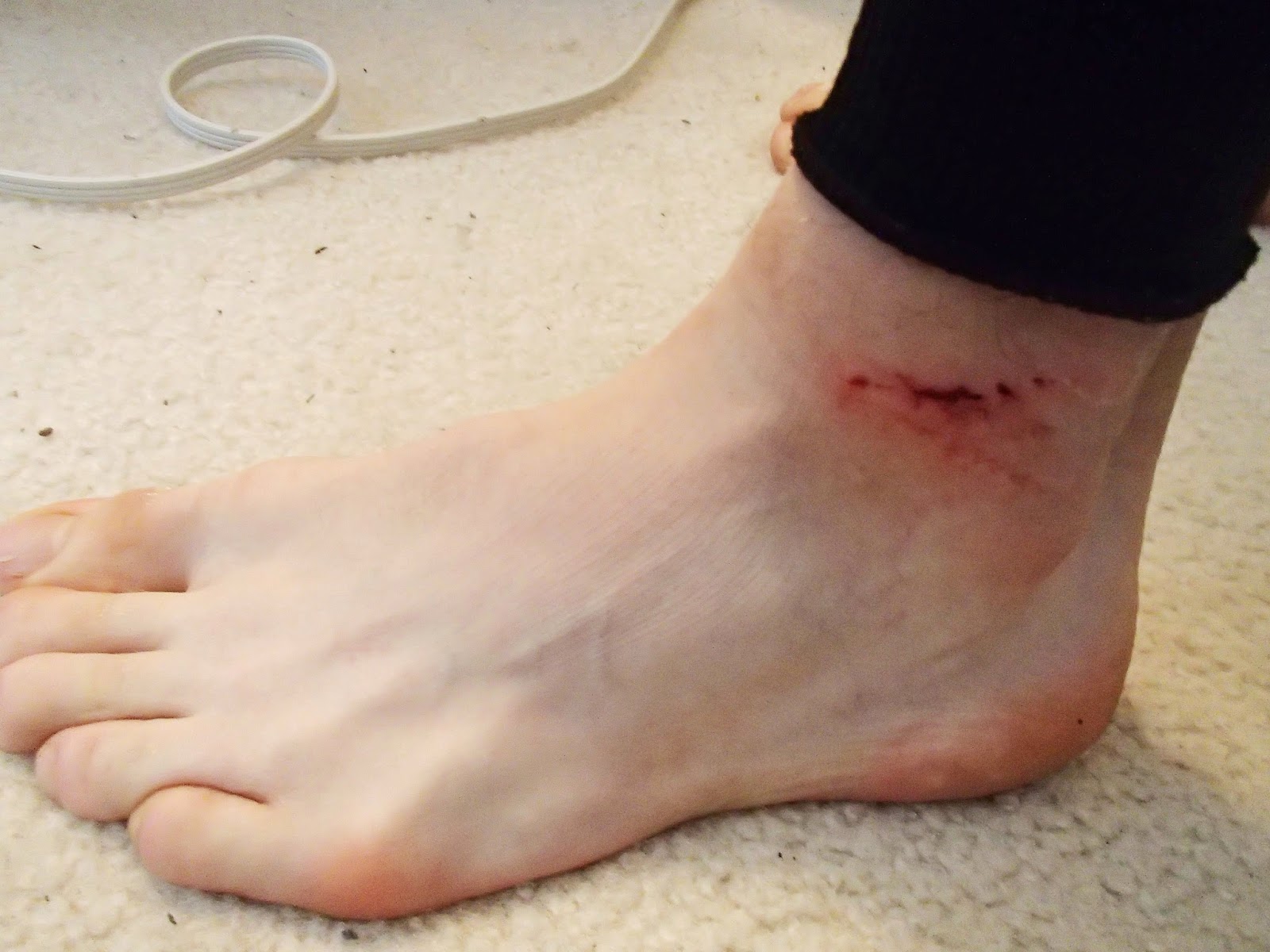 It took me 30 minutes to recall that in taking the above Castle Craig picture, I had stepped into some snow that had a shelf of ice over it.  The ice must have cut into the skin.  Oh-well.  Another bloody story to tell.

Questions
1.  Have you ever had a free race?
This is my 3rd year at the Tradition Run.  Any free race other than this one was due to winning the registration.  They do a darn good job with it!

2.  What is the best post-race goodies/food you've had at a race?
Who can beat cake at a free race??

3.  Have you ever injured yourself without knowing how you did it?

Great Job! Best Post race food is Obviously the Bananas! I am obsessed with Bananas..lol!