"What I wouldn't have given
to be in Idaho this weekend."

How many times have you heard that?  Not often, right?  What the heck is in Idaho?  Potatoes?  Sure.  But yesterday was Ironman 70.3 Boise and if you haven't seen the onslaught of tweets and news reels coming out, then please read on.

First off, the Boise Ironman 70.3 starts at 12pm noon.  For all of those athletes who wake up before dawn to spend hours at transition before the sun even comes up, you might want to look into Boise for next year!


Apparently the weather in Boise this weekend was bad.  It was 47 degrees at the swim start (again, at 12pm noon) and the wind chill on the bike had it down to low thirties (snow was on the foothills).  Given this drastic climate, the officials opted for shortening the bike course from 56 miles down to an incredible 15.  That's right, almost the distance of a sprint triathlon.  The swim and run remained unchanged.

To add to this, several pro men including Matty Reed wore their wetsuits on the bike.  I give them a lot of credit for doing so because there's no way I would think of that and realize it's a logical move.  I guess it's faster than taking the wetsuit off and then putting something else on.  If I hadn't paid so much for my own suit, I would give that a try.

Then came the finish.  As tons of triathletes know, the winner usually comes in with at least a minute or more buffer over the next racer.  We've all wanted to see a fight to the finish, but it rarely happens.  Boise finally gave us a show! 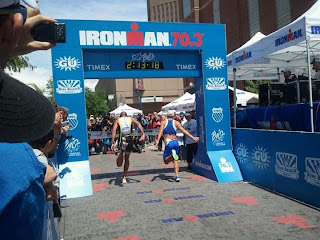 That is Matty Reed (left) and Callum Millward (right) crossing the finish line at full speed stride-for-stride.  I've read plenty of comments both by journalists, spectators, and tweets from @boomboomreed and @TOinTRI saying that Matty crossed J-U-S-T ahead of Callum.  But here's a different view to add to the decision. 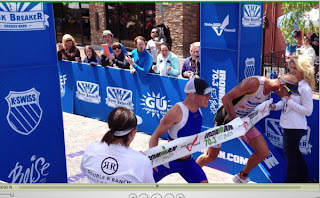 Based on the first photo, I might say it's too close to call.  But here it looks like Reed is certainly ahead by... well, a head.  However, if we go by chip times (which we always do), Callum came in one second ahead of Matty - 2:13:23 versus 2:13:24.  That might make you think twice before deciding which ankle to put that timing chip on, huh?  On a side note, I know elite marathoners that will run with a chip on both feet to avoid this issue.

And finally, here's the dramatic video at the finish line...


No matter who you think won, I think we can all agree that that is by far the most entertaining triathlon win ever.  ...of all time! (gotta' plug a little RvB).

In the end, Ironman made history by announcing a tie, the first ever.  Callum and Matty went home with the win at Ironman 70.3 Boise while Timothy O'Donnell who had a crash on the bike came in third.  Check out TO's bike seat post-race... 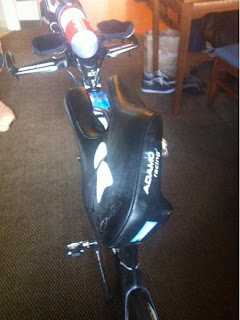 How do you ride that?  Side saddle maybe?

So yeah, despite the horrible weather I would have had to endure, THAT is why I wish I was in Idaho this weekend.


Questions
1.   Anyone want to chime in on your thoughts of the tie at Boise 70.3?
Do you think the tie was a fair call?  Do they end up splitting the money and points?

2. What are the craziest conditions you've raced in?, or spectated in for that matter?
I raced a 5k in freezing rain (December) and an Oly tri in a downpour (August).  Aside from that, just high heat; nothing too crazy.

I don't know why it was considered a tie. A second ahead is a second ahead. They increased the purse $10,000 for this race so I don't think they have to split the purse.

Great post, Kurt! I think this is so amazing. I've watched the video a few times and the fact that they are literally stride for stride makes me happy they called it a tie. The timing chip caught that Matty's chip was on his non-extended leg, not that he was slower than Callum.